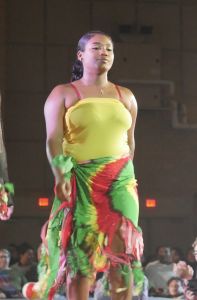 On March 1, 2019, I walked the stage for the first time at the BSU Fashion Show in Davis Gym. The fashion show is an annual event, hosted by Black Student Union (BSU) at Bucknell, showcasing the artistic talents of the members through clothing. Before walking, I paced back and forth backstage, switching up my poses, practicing the faces I would make, and preparing myself for any types of failure.  Adrenaline pumping through my system, I opened the curtains and slapped on a fierce face that would hide my nerves and doubt. The audience stared at me with smiles, and I could hear my friends cheering for me until it hurt. The scene was called “A Night in the Burg” directed by Jasmine Owens, which was supposed to encompass a party, specifically at 7th st house. It was honestly one of the most fun things I have done, but did not realize until I got off stage. The second scene I walked in was “Caribbean Getaway,” which for me included two performances. Besides walking the stage for a second time, I also had a dance performance with my team the Bisonettes.

It was gratifying to be so involved with something people worked so hard to put together. My nerves did not equate to the amount of appreciation I have for the people who came up with the idea to showcase the beauty of people of color, along with encourage others to continue to make it happen. Although it was a BSU event, there were a diverse amount of faces that walked the stage ranging from African American, Afro-Latina, white, and asian. It was an event that displayed beauty in all different shapes, sizes, and colors.

Posted by Nigesh Prajapati on March 28, 2019
No Comments