“Is racism still just black and white?” Dr. Rahuldeep Gill asked. With the changing political and cultural climate, the demographics of the United States are progressing towards an array of different racial backgrounds and colors. With the changing climate, how we identify, address, and combat racism must adapt. 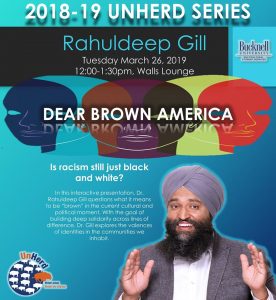 Dr. Rahuldeep Gill visited Bucknell on March 27th to present in Multicultural Student Services’ UnHerd Series. Dr. Gill is an associate professor of religion at California Lutheran University, with focuses in the evolution of Sikh tradition as well as the interaction between Sikhs, Buddhists, and Muslims.

In his presentation entitled “Dear Brown America”, Dr. Gill focused on solidarity between different ethnic and religious groups. He began his presentation recalling a story that went viral on twitter not so long ago. A prominent comedian posted a video in which they harassed two Sikh men boarding a plane, claiming that these men were a threat to the plane for no reason other than their physical appearance. Dr. Gill explained that, for him, the ignorance was most hurtful because the comedian was a Black woman, someone who he hoped would not act with such ignorance based on the racism and prejudice that she was likely familiar with.

Dr. Gill then went on to talk about how the most successful and remembered social justice movements that were backed by solidarity amongst different identity groups. His example was the Civil Rights Movement. When Dr. Martin Luther King Jr. marched in the Selma Civil Rights March to Montgomery, he was accompanied by Rabbi Abraham Joshua Heschel. Rabbi Heschel marched with King despite many Jews being against his participation in the march. Rabbi Heschel believed that fighting for a persecuted group superseded the disappointment and discontent of his ethnic enclave. Dr. Gill emphasized that Heschel’s choice to stand with black Americans in their crusade for their rights was imperative in the bridging of differences. Dr. Gill expressed the need for solidarity going forward. Solidarity amongst different oppressed groups strengthens the fight for equality and diminishes the power that supremacists hold.

Posted by Nigesh Prajapati on April 1, 2019
No Comments